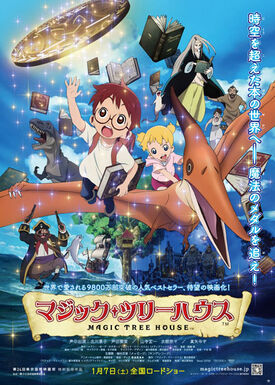 Magic Tree House is the anime film adaptation of the Magic Tree House series. Adapted from the Japanese version of the books, it debuted at the 24th Tokyo International Film Festival on October 23, 2011 and was subsequently released in Japanese cinemas on January 7, 2012. [1] [2] It was directed by Hiroshi Nishikiori.

Jack is a shy but confident bookworm and his sister Annie can quickly make friends with whoever she wants, both humans and animals. One day, while they were playing together in a forest, they unexpectedly stumble upon a wooden treehouse located in this forest. This magical treehouse allows people to travel across time and space whenever they liked. Morgan le Fay is accidentally transformed into a mouse named Peanut by Merlin (echoing the plot from books 5–8), and Jack and Annie have to find four magic medallions to rescue her. They visit the late Cretaceous period with dinosaurs (from book 1), a medieval castle (from book 2), the town of Pompeii (from book 13) and a pirate ship (from book 4). At the end, Peanut is once again turned into Morgan.

The movie was released in Japan by Gaga Communications and was developed by the Ajia-do Animation Works studio. During its theatrical run, the film grossed $5,747,918. [3] There are currently no plans to bring it to the United States, due to series author Mary Pope Osborne not wanting to bring the look over to the country. [4] It was released on Blu-ray and DVD on August 3, 2012. [5] [6]

Community content is available under CC-BY-SA unless otherwise noted.
Advertisement